What is GrooveBlog and Why You Should (or Shouldn't) Use it for Blogging?

GrooveBlog is the content management system (CMS) that powers infoSpike.com and many other blogs. It's part of the Groovefunnels suite that contains over 17 marketing apps and services.

In this article, I'll provide a review and discuss why I'm using GrooveBlog instead of other popular CMS' like WordPress and Drupal.

Before I Dive Into GrooveBlog

To give you a better idea of why I switched, I thought that I might give you some background to get a deeper understanding.

While I've been using WordPress since it came out many, many years ago, my CMS journey didn't start there.

I started building websites back in the mid-90's. Most people didn't even know what the internet was or what Mosaic was (that was the main browser I used back then).

I was building websites with code, then WYSIWYG (what you see is what you get) software like Frontpage came out, and then I was considering using forum software to run a website.

I'm so glad that I didn't go that route. I ended up testing blogging software in the early 2000's. The one that I clinged to at the time was Pivot. It allowed me to create blogs without a database server. It was able to do that using something called flat files, which is pretty much a text-based database.

Later, I started using B2, Drupal, and then eventually WordPress (WP).

What I really loved about Pivot was that it was lean. What I didn't like about it was that it felt clunky and there was much to be desired in their user interface (UI).

When WordPress came out, I was jazzed about it since it was easier to use. As it started to mature, developers started to expand its functionality through plugins. I was one of them. I built out one of the first generations of premium membership site plugins in PHP 4. Here's an old archive - without CSS and images :(

I've probably tested out 100's of plugins throughout the years. Many will come and go, and fortunately, I was able to find similar replacements. Some of my favorites that have been around for many years are YoastSEO, Wordfence for cybersecurity, Redirection, and WooCommerce.

What Sucks About WordPress

The first thing that comes to mind is all the hours that I've put into "playing around" with it.

While it seemed like I was being productive in conducting business research, there was so much time flushed down the drain.

If I was to translate those hours into actual real business producing tasks, I would probably be retired and sipping piña colada's from the beach.

I do take responsibility for all of that non-productive stuff, but it's a common occurrence with WordPress. If you add a technical user to WordPress, then you can greatly multiply the amount of wasted time.

The second most sucky thing about WP is security. The peeps at Automattic have really improved cybersecurity of the years. It's not just WordPress you have to worry about. The more plugins you add, the more risks that you take on.

Even if you have a managed WordPress service, WP and its plugins are open source. That means that hackers can examine the code and find faults.

In the past, I used to update my WP and plugins once a month or 2. After getting dozens of WP sites hacked into, I tend to update my sites throughout the week, every week. While WP doesn't update that frequently, you still have to keep an eye out for plugin and theme updates.

Don't get me wrong. WordPress is one of the best CMS' out there, and it's extremely versatile.

My Big Reasons for Switching to GrooveBlog

As you might have already guessed it by now, there are 2 major reasons why I switched. I wanted to use a platform that would help me boost my productivity and reduce security issues.

The technology behind Groove Blog is managed. What makes it difference compared to managed WordPress services is that it's not open source. It's closed, meaning that you, other developers, or hackers won't be able to easily see how the system is built.

I also mentioned that I can be more productive.

If you want to style your blog, you can use the built-in interface within the Groove theme to modify your appearance settings, or add custom CSS.

If you want to add 3rd-party functionality, you can embed JavaScript. I do this for custom pop-ups and alerts.

If you want to add advertisement banners to your header, footer, or sidebar, you can do that within GrooveBlog.

If I want to build a shop, I would use GrooveKart instead of WooCommerce.

If I need to edit Metadata or Open Graph, it's already built into GrooveBlog. 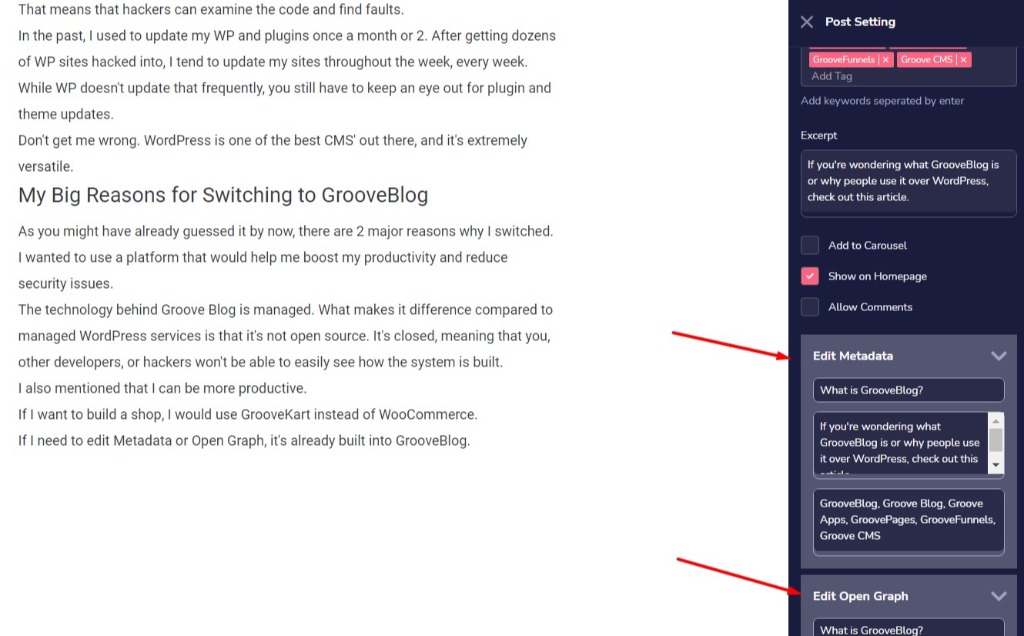 GrooveBlog doesn't need any special plugins to add YouTube videos or images to your post. That's all built into the system.

If I want to design a landing page like I would in Elementor, then I would use GroovePages which is a fully-featured landing builder.

You don't have to worry about traffic quotas or getting penalized for getting too much traffic. Just focus on blogging!

What Sucks About GrooveBlog

Now that I've mentioned a lot of things that are awesome about the Groove ecosystem, I also want to let you know about what I don't like.

Probably the biggest thing is the lack of plugins and themes.

Yeah, I know, I mentioned a bunch of crap about them.

However, it's not the plugins that I don't like. It's the security issues that go along with them.

Also, I don't need tons of plugins. The ones that I would like to see are something like Ad Inserter, a sitemap.xml plugin, the ability to add ads.txt, and then a table of contents plugin or feature. Most of those are great for AdSense or display ads sites. Since this isn't a display ad-focused site, I'm cool for now :) Nowadays, I'm more focused on promoting offers through direct response marketing.

If you're totally focused on AdSense or display ad sites, then WordPress might be a better option for now.

For those people that really want to play with plugins or have the ability to expand GrooveBlog, don't worry. It's coming. The co-founder, Mike Filsaime, has mentioned that they're opening up the dev arena to developers so that they can expand the use cases of GrooveBlog.

With all that being said, I look forward to the Groove tech stack becoming more mature.

Being More Productive with GrooveBlog

One of the reasons why I blog is to build an audience and provide value. With GrooveBlog, I'm able to focus on what really matters on a blog - creating and publishing valuable content.

I've been able to keep it simple. With its clean interface, you won't find a bunch of distractions.

When you open up a new post page, you'll see a white text editor, that's ready for you to start cranking out epic content.

If you need any help, they have an excellent support team, a Facebook community, and tons of training content to learn from.

I hope that this article has given you the pros and cons of using GrooveBlog. It's been roughly a 1+ year since I've been using it across multiple sites. I've seen the Groove dev team push out so many feature enhancements and bug fixes since then.

Out of all the SaaS systems that I use in my business, they have the most active development team that I've seen. Every week, the team communicates on YouTube and Facebook, and they also provide great support.

If you're looking for a blogging platform with less tech headaches, and one that can help boost productivity through its simplicity, then I highly recommend GrooveBlog!

Try out GrooveBlog without paying a dime

Learn How to Create Solid Income on Autopilot