Tokyo, Japan: The Top 7 Tourist Attractions That You Must See
Travel

Tokyo, Japan: The Top 7 Tourist Attractions That You Must See

Are you planning to go to Tokyo, Japan? Here are my favorite tourist attractions. 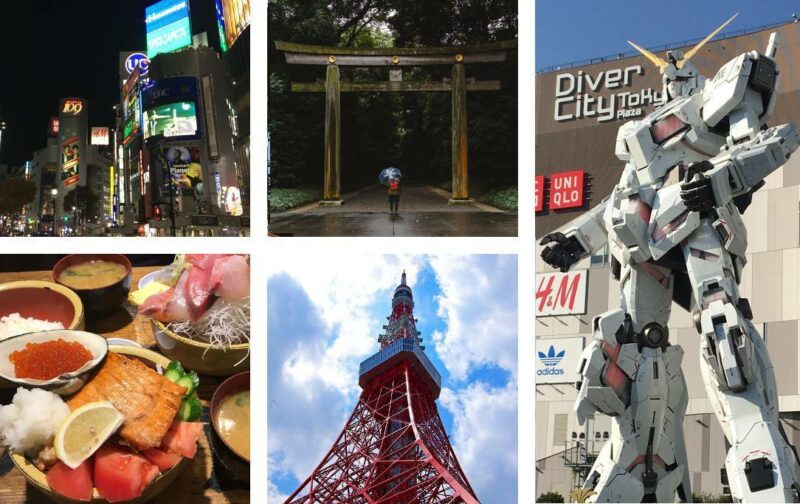 In this post, I'll go over the top highlights of our Tokyo, Japan trip! The last time that I went to Japan was right after college. At that time, I was into robots, Japanese animation (anime) and comics (manga), into modern electronic gadgets, and the big city life. Tokyo has a lot of this and much more!

For many years, Shinjuku, one of the 23 wards of Tokyo, was one of my favorite places to visit. This time, Emma was by my side and we had the chance to explore the top tourist attractions that Tokyo could offer. While it's a modern metropolis, you can still feel some of Japan's older traditions embedded within the culture. 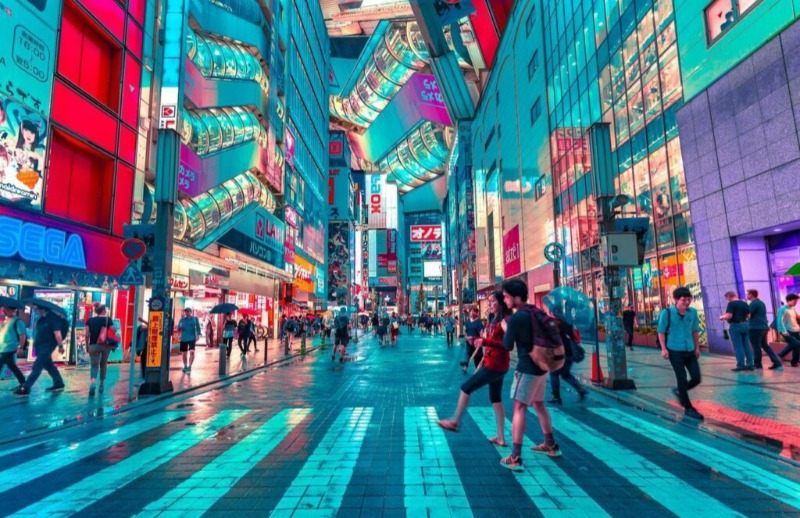 Here's 7 of our must see places!

Tokyo Tower is an active broadcasting facility with sensational views of the cityscape. We find the tower bedazzling when it lights up against the night sky. The shopping complex at the base is called Foot Town. There are international restaurants and shops, an anime theme park and an aquarium. The design is based on the Eiffel Tower which is 300 meters (984 feet) tall. Tokyo Tower has a height of 333 meters (1093 feet). Tokyo Tower was completed in 1958 (source). 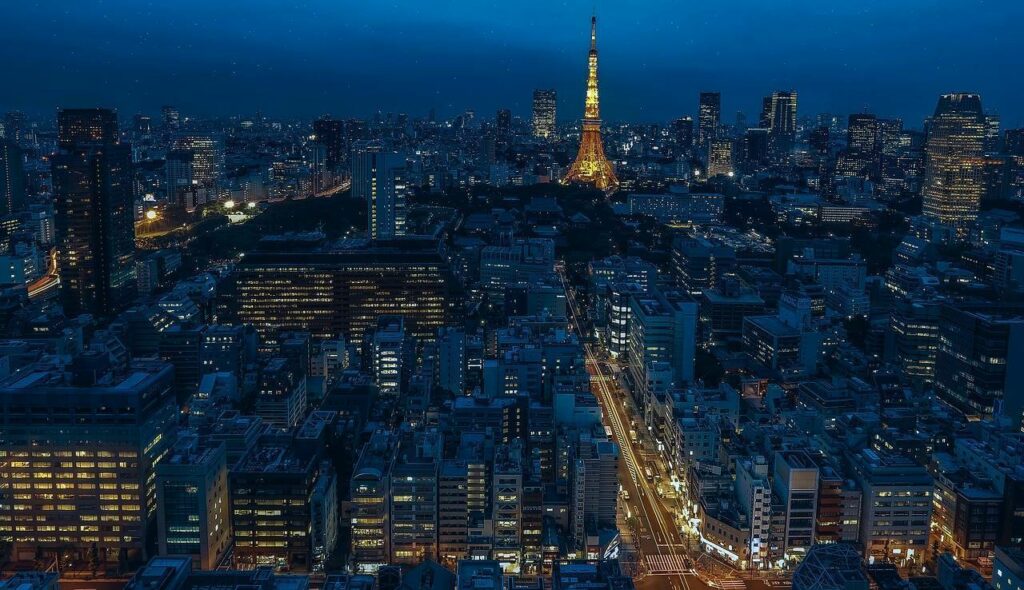 The tower has been separated into three different sections. We enjoyed the souvenir shops, delicious restaurants and vibrant cafes of Foot Town. The second section is One Piece Tower. This theme park focuses on famous anime and manga. The final section is the Main Observatory. This is 150 meters high with extraordinary views of the city. We do not recommend the look down the window for anyone with an aversion to heights.

We have seen the most sensational views of all from the Special Observatory. The 250-meter height provides panoramic views of the city below. When the weather was just right, we were able to see Mt. Fuji and Skytree on the horizon.

Things to do in Shinjuku

One of our favorite places to visit in Shinjuku is the Central Park or Shinjuku Gyoen. This is in the heart of one of the busiest districts in Toyko. We enjoyed the beautiful cherry blossom trees, shrine, cascading waterfalls and locals enjoying picnics in the shade. 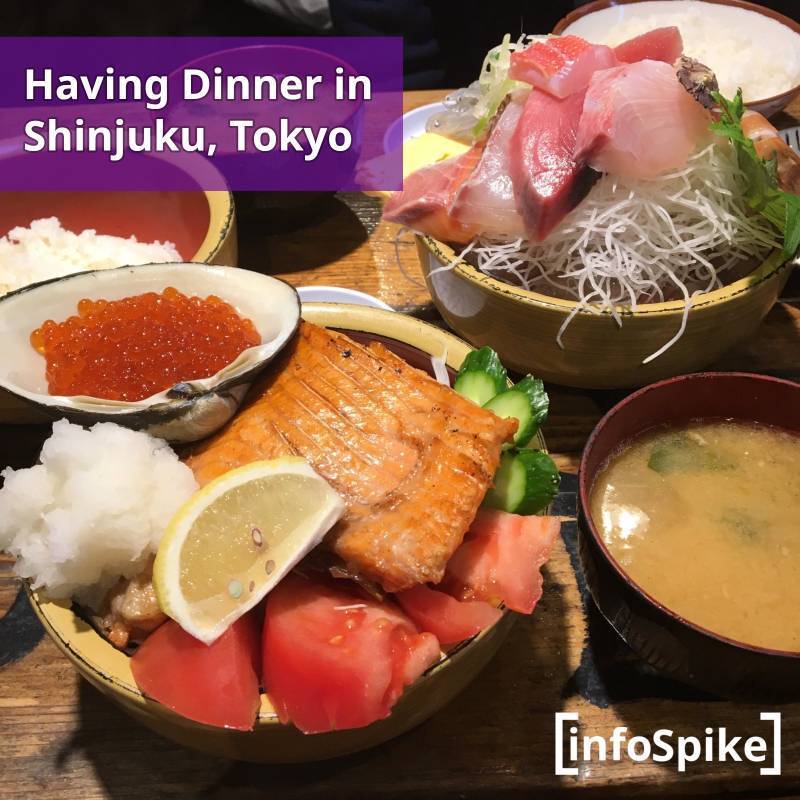 Japanese street food is amazing. We always eat more than we should. Some of the food appeared odd at first but was delicious once we gave it a try. One of our favorites is octopus balls. This contains bits of octopus with a savory batter. It is excellent with Japanese mayo, ginger, onion and shredded nori sheet. 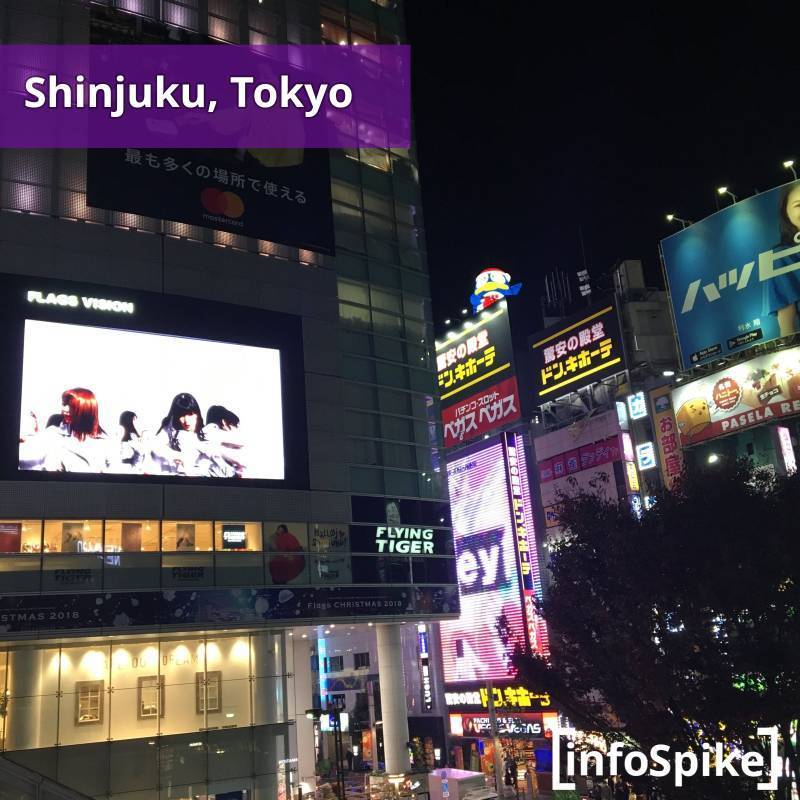 We recommend spending some time at Kabukicho. This is the biggest entertainment district in Asia. We enjoyed dinner at a Robot Restaurant, had fun in a karaoke bar, did a little shopping, took some amazing photos and relaxed in a hostess bar over cocktails. 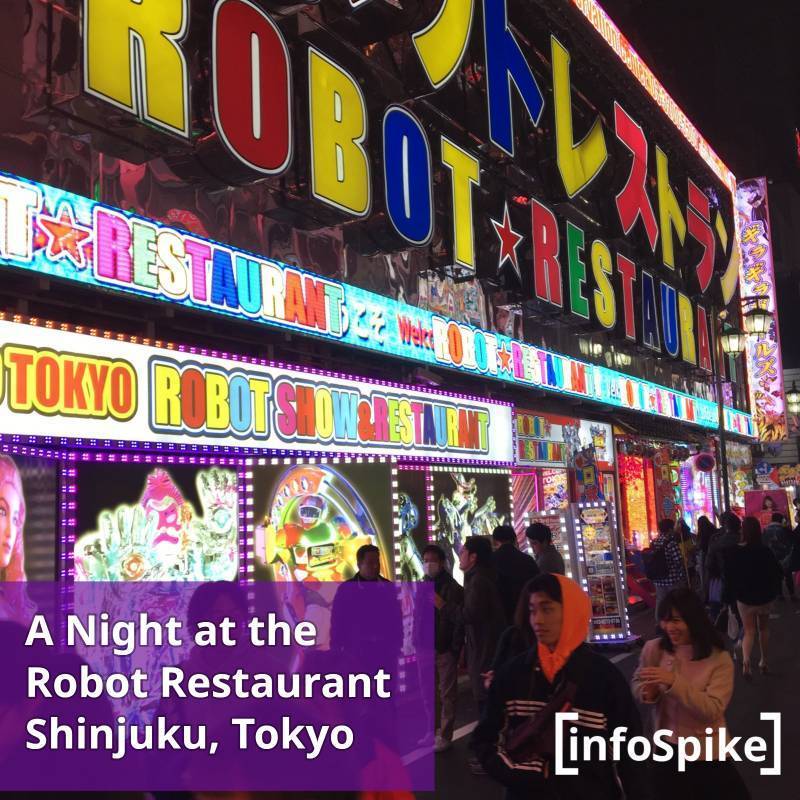 Things to do in Shibuya

Shibuya is an entertainment and shopping district. We were mesmerized by the neon signs and crowds of people. The vibe is completely different than that of a traditional Asakusa neighborhood.

One of our favorite sights is Hachiko. The loyalty of this Akita dog made Japanese history. He waited every day at Shibuya Station for his owner to arrive after work. Once his owner passed away, he spent the next nine years at the station waiting for him until he died. A bronze statue was erected in his honor right outside the station. 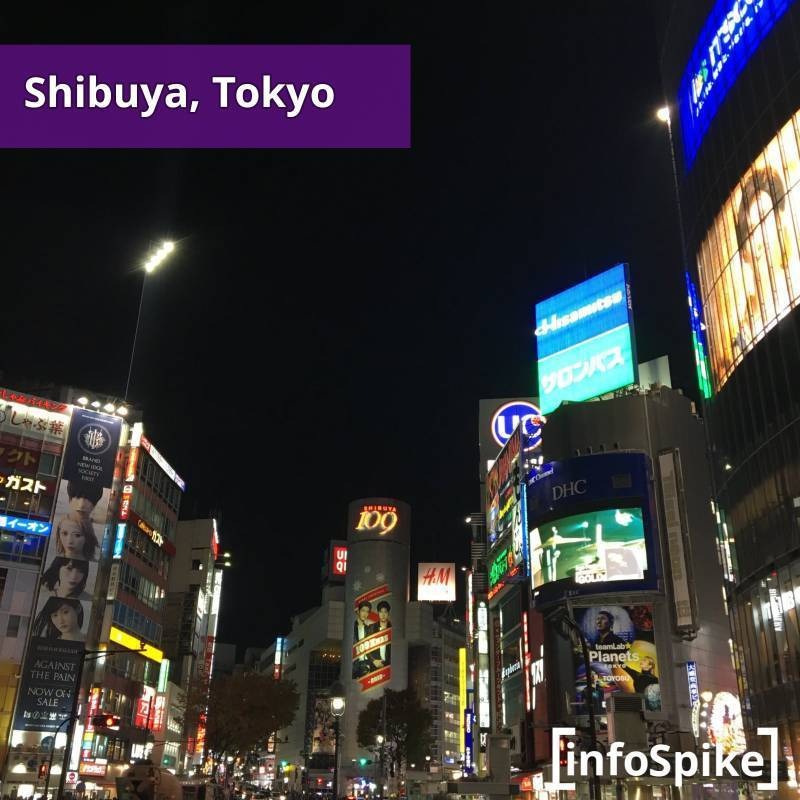 We really enjoy Tokyu Hands. This is a department store with everything imaginable. We have purchased everything from luggage to souvenirs to tea. We prefer this location because it was the first, opening in 1976. There are eight floors with three sections each for a total of 24 mini-floors. This is some of the most sensational shopping we have ever seen.

The busiest pedestrian intersection we have ever seen is the Shibuya Scramble at Shibuya Crossing. Thousands of people are trying to cross the street at the same time. Once we experienced the scramble first hand, we decided we preferred watching from above. There are several coffee houses with seats next to the windows. We like to relax, have some dessert and watch the scramble.

Things to do in Harajuku

Harajuku is one of Tokyo's popular neighborhoods for shopping. This is the Japanese hub for pop culture. We have explored the themed cafes, thrift stores and fashion boutiques many times.

The biggest public park in Tokyo is Yoyogi Park. We always visit during the spring to see the cherry blossom trees, flowers and hanami. The weekends are great because we can watch the street performers. Sunday is our favorite since this is when the Tokyo Rockabilly Club appears with dancers performing rock and roll from the 1950s. 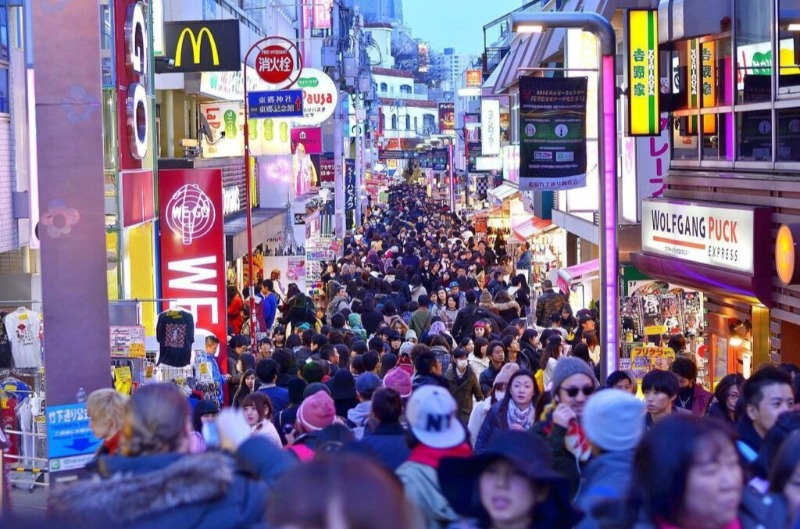 As a Shinto shrine, Meiji Shrine has been dedicated to the souls of Empress Shoken and Emperor Meiji. The lush forest surrounding the shrine is filled with trees donated from all over Japan. We each purchased a little wooden plaque called an ema at the shrine. We wrote down our prayers and wishes then they were hung beneath the trees as an offering to the Shinto gods.

Although we have taken pictures in front of Tokyu Plaza, we did not leave before going inside. We have taken both the steps and the elevator to the sixth floor. This is where the rooftop of the plaza is located. This is one of the most tranquil and peaceful places we have ever experienced.

Ginza Six is a fantastic shopping complex encompassing more than 500,000 square feet. We had to come back several times before we saw all 241 shops. There were international brands and native designers. Yoshio Taniguchi is the architect who designed not only Ginza Six but the NYC Museum of Modern art as well. The inspiration of the floorplans came from the alleyways of Ginza and Kyoto (source). 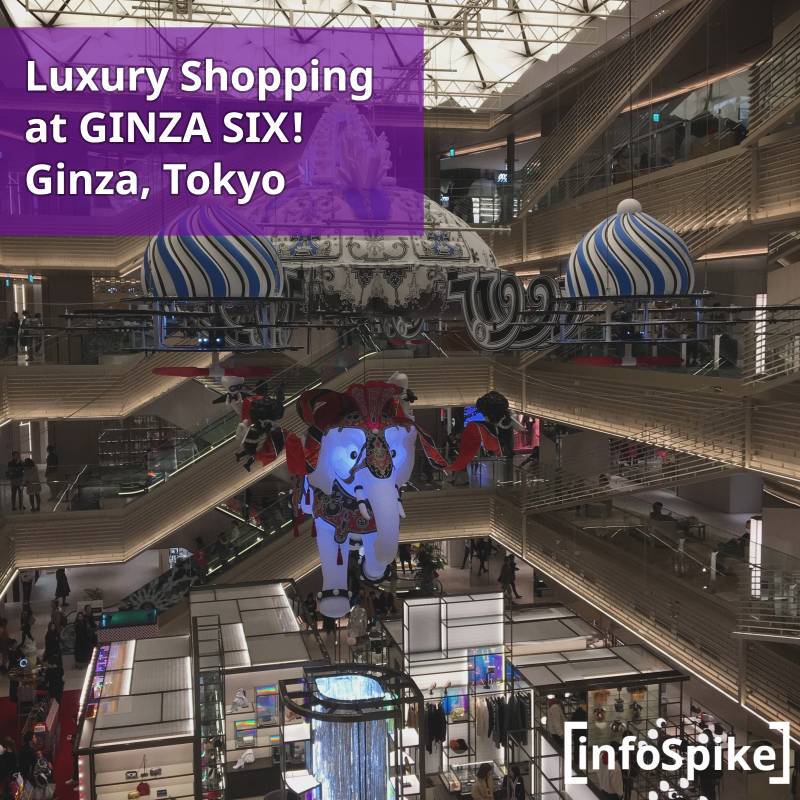 We spent time browsing through Rag & Bone and the House of Dior before we discovered the basement. This is an incredibly posh food hall. Incredible sweets are crafted in small batches including matcha soft serve, tofu doughnuts and fresh pudding with Hokkaido milk.

We also discovered culture at Ginza Six. The Kanze Noh Theater was located in Shibuya. The cypress stage was dismantled and brought to one of the underground floors. We relaxed and enjoyed the fresh air on the rooftop among the grass and then watched the traditional masked musical. We spent most of our time looking at the luxurious merchandise available. We even splurged on a few purchases we were unable to resist.

The Nightlife of Roppongi

The nightlife in Roppongi is pure magic. Some of the most spectacular and largest properties in Japan are found here such as tourism developments and commercial businesses. We had a lot of fun in this district after sunset.

V2 Tokyo is on the top floor at the Roppongi Roi Building. We had a good view of the adjacent areas because everything was surrounded by glass. The state of the art DJ equipment and sound added to our enjoyment of the venue. The club has established an international reputation bringing in thousands of visitors from across the globe. We danced, drank, laughed and the night disappeared.

Roppongi Kaguwa is the red light district in Tokyo. We went to several of the Japanese restaurants to see the contemporary and traditional shows featuring Geisha, Samurai and Oiran professional dancers. The combination of entertainment and delicious food kept us coming back for more. 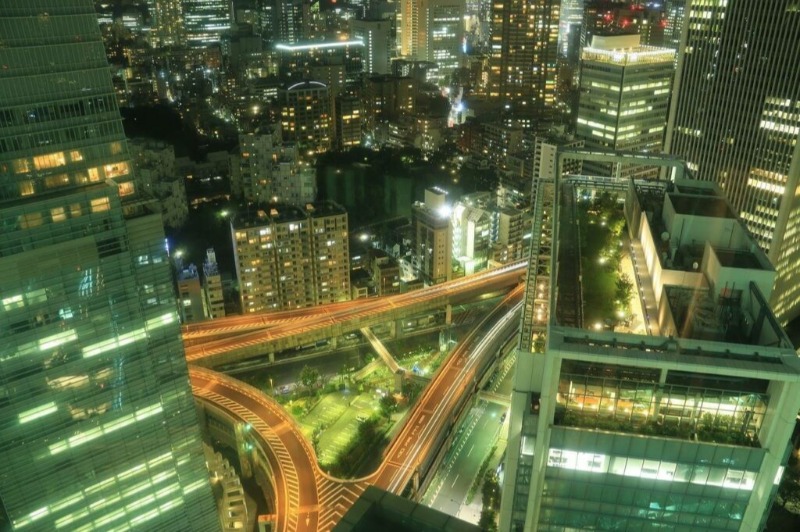 We spent several nights enjoying the beautiful skyline of Tokyo at the Mori Tower. Since our tickets included admission for the Mori Museum, we enjoyed the contemporary art exhibits as well. We visited the Observation Deck on the 52nd floor first for a 360-degree view of the city. We went to the sky deck next only to be overwhelmed by the beauty of the city at night.

The A-Life nightclub had everything. There was a dance floor in the basement, an Island Bar on the first floor and a lounge area on the second. The atmosphere and sounds were created to ensure the partygoers were able to take full advantage of the night. The mood for every concept was beautifully matched with the newest Martin Audio System.

Things to do in Odaiba and Diver City

Odaiba is one of the man-made islands found in Tokyo. The island was completed more than fifteen years ago. The island was built with a futuristic vibe and has become very popular with the tourists.

Our favorite stop is the Unicorn Gundam robot statue. The Gundam television series released in 1979. There are now Gundam manga, plastic models and movies. The show was set during the future where space has been colonized and the people use vehicles referred to as Gundam mobile suits. 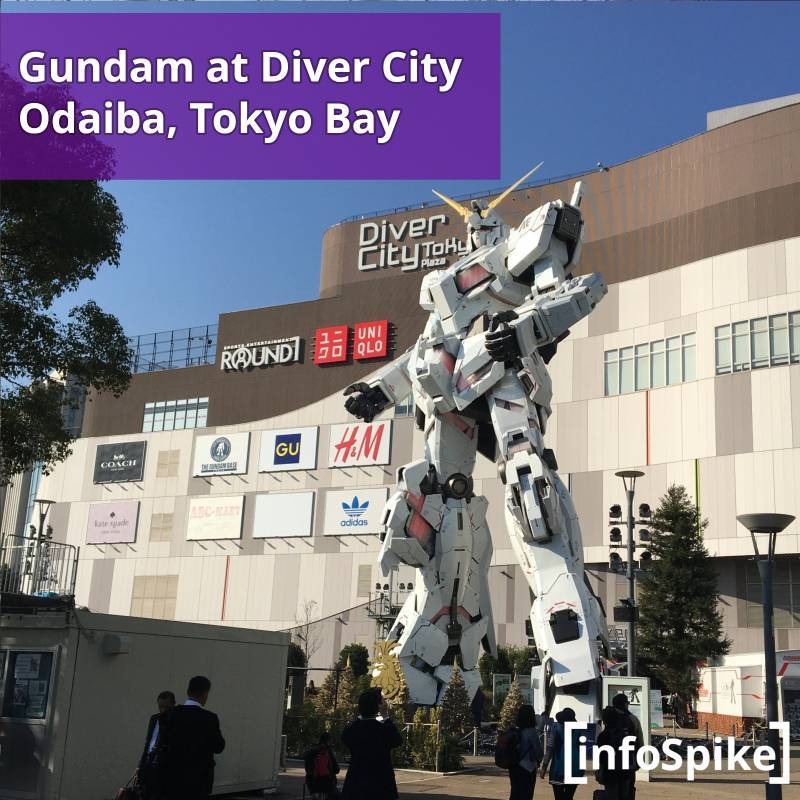 The Unicorn Gundam replicates the RX-O Unicorn Gundam. The robot is about 65 feet (19.7 meters) tall with a single antenna and a white frame. It was a magnificent sight and we're glad that we were able to see it in our lifetime!

The Odaiba Illumination is an incredible light display including backdrops of Tokyo Skytree, Tokyo Tower and Rainbow Bridge. We often attend when the show begins after sunset. One year we were in Tokyo during Christmas. A lot of the light displays had amazing Christmas themes.

Oedo Onsen Monogatari is also a great place you should check out. It's one of the largest artificial hot springs in Tokyo. So if you're looking for a place to relax while enjoying the traditional onsen experience, this place is for you!